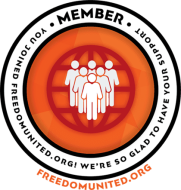 There are many government funded and NGO’s out there doing a great job in the fight against human trafficking and modern day slavery. I’ve found Freedom United to be one of the best. Their vision is one that I share – dedicated to ending human trafficking & modern slavery. They are the world’s largest anti-human trafficking community, and they equip millions of supporters with awareness, education and ways to take action that drive real change.

The plot of Big White Lies, Jay Darby’s latest crime thriller, evolves around the issue of human trafficking and child slavery. Jay hopes that the controversial tone of the book can bring much needed attention to the plight of children being exploited by human trafficking syndicates.